What is a Stroke?

Strokes are very common around the world and is one of the leading causes of disability and / or death!

A Stroke is when there is an attack to the brain due to insufficient blood flow and can happen anytime to anyone. During this time, the brain cells die due to no oxygen and blood reaching them. The brain is therefore unable to control muscles, sensory inputs, memory, cognitive abilities, motor functioning and other areas of the body. It really depends on the intensity of the stroke and how damaged the brain is, however, in general, 2/3 people who survive a stroke will have some level of disability.

Simple movements of the body become the greatest challenge and most people give up on life because they don’t recognize their body any longer! The most daunting experience is when the body becomes fatigued from muscle spasms that occur during this time.

Although Stroke survivors are physically, emotionally and socially very disturbed, the important thing is to NOT GIVE UP! Pilates is becoming a trending alternative to rehabilitation and therapy for Stroke patients and in such circumstances, Pilates becomes Clinical.

Even though Clinical, the core principles of Pilates (as passed down from Joseph Pilates, creator of the True Pilates Method) are still applied along with traditional therapeutic methods in order to speed up and maximize recovery.

An efficient and effective therapeutic routine for Stroke Patients should therefore include:

Centering: The Patient combines the mental and physical focus of every exercise which create ‘self- correcting’ patterns of exercises in the brain and this is when the body reconditions itself towards recovery.

Control: Pilates stimulates the nervous system by rewiring it to re-gain the control the brain had on the entire body before the attack.  Adding Control towards breathing and strengthening postural muscles enhance stability, correct the muscular imbalances and ensure proper alignment.

Flow: Effective recovery programs should include smooth and continuous transitions between Pilates exercises. Stroke patients who have been paralyzed on one side have an inclination to focus on the unaffected side of the body. The body therefore, becomes imbalanced. An effective recovery program should involve Pilates as it involves a flow of exercises that lengthen the spine which in turn mobilizes the pelvic area that stimulates a range of motion which balances the body.

Breathing: Clinical Pilates allows the stroke patient to breathe effectively and in a controlled manner. Breathing helps to reduce the frequent muscle spasms which is one of the main reasons why the body gets fatigued after the stroke. Breathing effectively also leads to proper posture alignment and balance.

Precision: With the presence of a qualified Practitioner and effective use of Reformer Machine, Pilates exercises done with Precision lead to significant improvements in a shorter period of time, rather than doing a repetition of exercises. It’s therefore, quality exercises rather than quantity.

Concentration: By consistently performing Clinical Pilates, the patient builds awareness of the body and gains a better understanding of the weak areas and where the concentration points dare for a greater recovery. 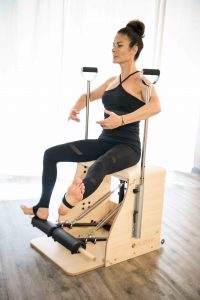 Although there is still further ongoing research being conducted in other parts of the world, it does however, give us an indication that Pilates in general, especially Clinical Pilates is definitely a trending solution for rehabilitation purposes.

Closing off with Joseph Pilates’s Quote which summarizes this entire topic: